Blog
You are here: Home1 / Blog2 / Nutrition and protocols3 / Vitamins, antioxidants are medicines

Vitamins are organic substances necessary for the optimal functioning of our body. With a few exceptions, our body cannot produce them independently (e.g., D, K). To stay alive, we need to get vitamins from food or dietary supplements.
Dutch physician Christiaan Eijkman discovered the existence of vitamins and this discovery in 1929. received the Nobel Prize in Medicine.

Vitamins and their role in the body 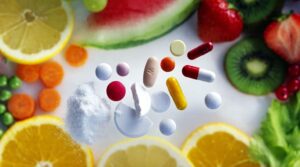 The name vitamin was coined by the Polish biochemist Kasimir Funk in 1912. year, deriving it from the Latin word for life, vita, and suffix amine (at that time, it was considered that all vitamins belong to the chemical group of amines, which today we know is not true).

In our body, vitamins play a major role and are indispensable components of biochemical mechanisms. They are components of the enzyme systems that regulate our metabolism by keeping us active and capable. Our body uses them to build, develop and rebuild tissues. They are necessary for our growth, vitality, and general well-being.

Thirteen well-identified vitamins are divided into two basic groups according to their fat or water solubility. Fat-soluble vitamins (D, E, K, A) are stored in the body’s fat stores, so there is no need for their daily intake, while water-soluble vitamins (C, eight vitamins B) cannot build up stocks, so their daily consumption is recommended.

Vitamins in the diet

A well-balanced diet contains all the necessary vitamins. A person who eats adequately can thus correct any vitamin deficiencies. However, people on special diets, increased physical activity, under stress, people recovering from illness or surgery, people suffering from certain types of gastrointestinal disorders, pregnant and breastfeeding women should take higher doses of vitamins (usually in the form of vitamin supplements) to meet the needs of increased metabolism.

Today, there is often a belief in the general population that vitamins, especially those that act as famous antioxidants, can be “cures” for several diseases. Thus, we talk about vitamins as medicines for a wide range of pathological conditions, from the common cold to cancer. One of the reasons is certainly the susceptibility to marketing campaigns of pharmaceutical giants that promote universal vitamin intake. Nowadays, there is a consensus that vitamins are necessary for the body’s optimal functioning. The only question is in what doses.

In the scientific community, there is no single common position on whether to take vitamins in quantities that are greater than the body’s daily needs. As we will show in this article, research is at least contradictory so that despite the great knowledge about vitamins, there are still a lot of unknowns and doubts related to them.

Vitamin C, E, and beta carotene (a substance converted to vitamin A in the body) are thought to act as antioxidants. Antioxidants are substances that counteract the action of oxygen radicals, unstable compounds that are normally formed in the body’s cells as a result of cellular metabolism.

They can damage a cell in many ways, damage DNA, and potentially increase cancer risk. Simultaneously, oxygen radicals chemically convert blood fats into bad LDL cholesterol, which settles on the walls of blood vessels. The hypothesis of these vitamins’ action against cancer and cardiovascular diseases is based on these facts. What is the evidence for that? Numerous studies have shown that people who consume many fruits and vegetables (the most important source of vitamins) have a lower risk of cardiovascular disease than those whose diets are poor in fruits and vegetables.

It has also been proven that people with an inadequate diet (lack of fruits and vegetables) have a higher risk of developing cancer forms. However, the basic criticism of these studies is that they do not prove that vitamins have this effect in isolation, so hypothetically, some other substance in fruits and vegetables has this effect.

You should note that oxygen radicals also have their “good” role in the body. Namely, some of them participate in the immune system’s normal functioning by using them to “kill” white blood cells. Therefore, overdoing it with antioxidants can do that function. 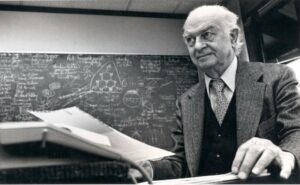 Along with several other megavitamin therapy proponents (Dr. Roger Williams, Dr. Irwin Stone …), the double Nobel laureate certainly plays the most important role. Linus Pauling (February 28, 1901 – September 19, 1994). It is hard to imagine the situation he found himself in 1970. in his book “Vitamin C and the common cold,” he announced that megadoses of vitamin C have a preventive and therapeutic effect against heart disease, cancer, and infections. At that time, vitamins were not given much importance, and many thought that only some weirdos wasted time researching their effects.

Today, twelve years after Pauling’s death, his revolutionary ideas are still controversial in some segments. Pauling was one in a series of megavitamin therapy proponents, therapy with very high doses of vitamins, even up to 600 times higher than the recommended daily intake. Today, megavitamin therapy is just one aspect of the still controversial orthomolecular medicine (a term also introduced by Pauling), which seeks to treat the disease with high doses of nutrients (vitamins, minerals, amino acids, essential fatty acids, natural fibers, antioxidants).

Linus Carl Pauling, an American, was considered the greatest chemist of the 20th century. Century. He was a pioneer in applying quantum mechanics in chemistry (the laws of quantum mechanics can explain many relationships in chemistry and molecular biology). He is considered one of the founders of molecular biology. He was a versatile person, and in addition to chemistry and biology, he was also involved in metallurgy, immunology, anesthesiology, psychology, nuclear weapons, radioactivity. He received the first Nobel Prize in 1954. Mr. for chemistry for a paper in which he described chemical bonds’ nature, while he received the second Nobel Prize in 1962. for peace because of the campaign he launched against nuclear tests above the ground, he became the first person in history to be honored twice. Later in life, he became a staunch advocate of regular consumption megadose of vitamin C…

The effect of vitamin C on the body

Today, the effect of vitamin C is very well known promotes iron absorption from food, creates and protects collagen (a protein that connects cells in the body), maintains the immune system, reduces the accumulation of fat on the walls of blood vessels, helps the growth of bones, teeth, gums, ligaments, helps create hormones that control our reactions on stress. Vitamin C also works against cancer. It prevents the conversion of nitrates from canned foods to carcinogenic nitrosamines in gastric juice. An in vitro study by the US National Institutes of Health, conducted in 2005. indicates the possible toxicity of higher doses of vitamin C to the cells of some forms of cancer in humans, which to some extent supports Pauling’s claims.

On the other hand, several studies modified Pauling’s hypothesis about the effects of vitamin C. Thus, in the early 1970s, Anderson and co-workers conducted a clinical study on 818 volunteers in which one group was given megadoses (4,000 mg/day) of vitamin C for the duration of a cold. the dose is 75 mg daily) and the other a placebo. The results showed that vitamin C did not prevent the onset of the common cold, but people who took it had less pronounced symptoms and faster recovery by up to 30% of the control group.

Similar results are given by recent studies conducted by Coulehan et al. Opponents of megavitamin therapy cite the harmful effects of high-dose vitamin C, primarily chronic diarrhea, and the increased incidence of kidney stones because part of vitamin C is converted to oxalic acid and oxalates, which can be deposited in the kidney as calcium oxalate and form oxalates. Stones. On the other hand, proponents of megadoses of vitamin C counter the fact that vitamin C is a diuretic, i.e., it increases the flow of urine through the kidney and prevents the formation of stones.

You can conclude that the evidence for taking high-dose vitamin C is at least contradictory. Some experts claim that it is useful for the human body, while others express their doubts. Today, however, moderation’s attitude prevails in the medical community, i.e., to megadose vitamin C (> 1000 mg/day) is not necessary. Still, it is enough to take up to 500 mg per day.

Dr. Shute in 1930. was the first to use high doses of vitamin E to treat cardiovascular patients.

As for vitamin E (tocopherol), research has shown that it certainly has a beneficial effect in heart patients and potentially in cataracts, Parkinson’s disease, and prostate cancer. Thus, a survey was conducted in 1995. Mr. states that people who took high daily doses of vitamin E (400 IU per day) had a significantly more favorable ratio of blood fats, which are an important factor in cardiovascular disease.

Another study found that 100 IU of vitamin E a day reduced heart disease risk by half. Scientists from Cambridge in 1996. Mr. indicated a 75% reduction in the incidence of non-fatal heart attacks in individuals taking 400 to 800 IU daily.

On the other hand, researchers at Johns Hopkins University in Baltimore found interesting data analyzing the results of 19 studies (involving over 136,000 patients) related to vitamin E. They found that people who took more than 400 IU of vitamin E a day had a 10% higher risk of dying than those who did not take it. Today it is recommended to take 10 in a day.

Although considered an antioxidant, two recent studies show that people who took 20 mg or 30 mg of beta carotene a day for a longer period of time had a higher frequency of lung cancer those deaths than those who did not. (1st study: 28% more cancers, 17% more deaths, second: 18% more cancers, 8% more deaths). However, not all studies have yielded negative results. That’s how it was in 1993. Mr. a study was performed that resulted in a 21% reduction in gastric cancer mortality in people taking the combination beta carotene, vitamin E, and selenium.

Although we do not call them medicines, vitamins in high doses act like medicines to cause side effects and harmful effects. For example, vitamin A in doses higher than 25,000 IU is known to cause severe liver damage, bone disease, and when taken by pregnant women, is teratogenic (causes fetal malformations).

Higher daily doses of vitamins are recommended for people with intensified physical activity (athletes, business people), people under stress, diet, and people recovering from illness or surgery. However, for taking megadoses of vitamins to improve health, there is still not enough evidence of the effectiveness of such a large intake of vitamins on human health.

This does not mean that vitamins should be discarded. On the contrary, given the pace of today’s life, poor quality, monotonous and irregular diet, vitamin deficiency has become a serious problem. Due to all the above, we recommend consuming as many fresh, unprocessed foods as a vitamin source and supplementing vitamin intake with adequate vitamin preparations, noting that although synthetic vitamins give satisfactory results, the benefits of natural vitamins far outweigh them at various levels. The recommendation goes in the direction of fresh fruits and vegetables. Because in addition to micronutrients (vitamins, minerals) discovered so far, it potentially contains other substances that have a beneficial effect or potentiate the action of already known vitamins.

Vitamins and minerals for cancer

DMSO and its medicinal properties

Glutathione and its role in the body
0 replies

Exercise – a beginner’s guide to the first workouts